The green roof at the Syracuse Center of Excellence headquarters building was developed to provide rainwater retention and curb the urban heat island effect, as well as provide a visible connection to nature. Link

The building site also features two storm water retention tanks to control run-off entering the sewer system. Rain and meltwater are collected from seven separate drains on the roof and stored in a 8,000-gallon tank in the building. This water is used to flush toilets, reducing both the consumption of drinkable water and the amount of water that is discharged into the sewer, and is tested for general water quality and for any pollutants. The second tank is placed in the southwest corner of the site to collect water from the Intermodal Transportation Center and landscaped areas of the property. 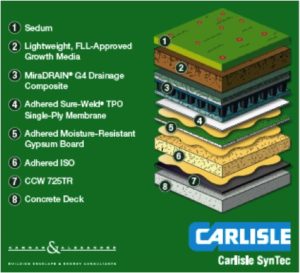 The top layer is made up of a variety of sedum. Sedum is a very low maintenance, hearty plant that is drought tolerant and can thrive in Central New York weather. There are six different types of sedum on the SyracuseCoE green roof. These include Sedum refluxum, Sedum sexangulare, Sedum acre, Sedum kamschaticum, Sedum spurium “Fuldaglut”, and Sedum album.

The second layer is a lightweight, FLL-Approved growth media. This type of growth media is necessary for growing sedum and has to be, lighter weight than the topsoil, better drained, weed free, and capable of supporting good plant growth without leaching harmful substances into runoff water. The media on the SyracuseCoE green roof is saturated between 4.8 and 6 pounds psf per inch of depth, has a high water holding capability, manufactured to strict FLL-compliant standards, will not compact once planted as well as retain volume after years used.

The third layer is a MiraDRAIN G4 Drainage Composite. The composite increases drainage rate and water-holding capacity. It holds 1.63 pounds of water psf (0.2 gallons or 0.31” of rain) and its high compressive strength resists crushing and allows a multitude of overburden options to be used.

The fourth layer is an adhered Sure-Weld TPO single-ply membrane. The membrane is a premium heat-weldable single-ply thermoplastic polyolefin (TPO) sheet, which has a high breaking strength, tearing strength and puncture resistance. It is chlorine free with no halogenated flame-retardants or plasticizers; exceptional resistance to UV radiation, ozone, and oxidation; and is 100% recyclable.

The seventh layer a vapor barrier, CCW 725TR, which relieves underground hydrostatic pressure and resists the penetration of ground water into a structure.

The bottom layer is a concrete deck, which provides the base for the green roof.

More from this Section